An exclusive fleet assists a California demolition specialist in making room for a new hotel.

We are all prone to have favorites. Whether it’s a beverage, a restaurant, music, or even the car we drive; once we find it, we tend to stick with it. It should come as no surprise, therefore, that construction firm owners have a similar predisposition when it comes to replenishing the equipment fleets that are so important to their livelihood.

It took years and a lot of trial-and-error for Curt Maloney, owner and CEO of demolition firm WC Maloney, LLC, to reach that conclusion. However, once he did, it was backed up by decades of strong excavator performance and the backing of a devoted dealer. The strength and dependability of such machines were on display during a recent project in downtown Sacramento, where a parking garage was removed to make room for a new eight-story hotel. By the end of the project, the site was ready for foundation piles to be driven, no debris was carried to the landfill, and Maloney’s Link-Belt fleet had proven itself once more.

Sacramento is more than just California’s state capital; it thrives even while development slows in other parts of the state. While California’s major tech/industrial areas have seen a commercial flight in the last decade, 44 new technology companies have emerged in the Greater Sacramento region during the same period. The project listed above demonstrates the city’s continuous growth and development. According to Curt Maloney, the ramp demo is not the only job the company — which is celebrating its 25th anniversary this year — will tackle that day.

“Company-wide, we average close to a dozen different ongoing projects daily,” he said. “My initial background is not in demo at all —  I was in the concrete cutting industry for 13 years until I teamed up with three partners, one of whom had been in the demo business for a while. The four of us did it all — we reviewed potential jobs, we bid them, and we performed the actual work. We did that for several years before I realized I could do better on my own. So, in 1996, along with a single partner, I established WC Maloney.”

He added that the company did well right out of the gate, landing demolition of the iconic Hegenberger Overpass in Oakland, a structure that spanned as many as 10 lanes of traffic. “That set the table for what was to come; we doubled our sales the second and third years, and business and growth have been steady since,” he said. “We work roughly a 100-mile radius around Stockton and, over the years, have diversified into building demo, land clearing, water treatment plants, and interior demolition projects. “I like to tell people that if it’s there today and you’d like it gone tomorrow, we’re your company.”

Though business was booming, Maloney is quick to note that not everything was smooth sailing in those early days. That major highway overpass demolition, for example, was handled using a single excavator that was “reliably unreliable.”

“I recall that machine suffering some sort of issue every other day,” he said. ”We demolished the overpass in the middle of the night, all the while praying that the excavator wouldn’t break down, so we could open to traffic in the morning. Looking back, it was a dicey situation but we made it.”

Maloney’s experience with the excavator made him aware of the need of a reliable machine, but the path to equipment confidence was not straightforward. As they grew, he said they attempted to remain with one large excavator manufacturer, purchasing several machines over a period of years. But when those units started breaking down and had parts problems, he felt a change was in order.

“At that time, around 2003, there was a salesman here in Stockton who called on us representing the Link-Belt line,” said Maloney. “We were at first apprehensive about switching, a feeling he countered with: ‘In the demo business, it is all about service and I promise I will service your company well.’ He also backed that up by telling us that a Link-Belt excavator would prove better on fuel, it is more solidly built and the engines run forever. Long story short: he convinced us to give Link-Belt a try.”

With that one purchase, the company’s excavator line was completely overhauled. Though it took six to eight years to eliminate the other troublesome machines, Maloney believes that the salesman’s appraisal of the Link-Belt machines could not have been more precise.

“Today, we have a fleet of ten Link-Belt excavators — all 350s in the 82,000 lb. class — as well as a smaller Model 80,” he said. “And everything we were told about the machines has proven true, especially the feature that appealed to us most when considering the change: the fuel economy. The machines we had at the time were burning 10 to 11 gallons per hour and the Link-Belt units burn about 8 gallons per hour. That’s more than a 20% savings which, across the entire fleet is huge.”

And that engine reliability the salesman promised? Maloney said it proves itself true — daily, adding that the 268 HP Isuzu motor found in all the 350 machines is virtually unstoppable. “I hate to keep dredging up the past, but the machines we used before these had a period in which they developed head problems, then later, injector issues; they were spending a good deal of time in the shop. By comparison, I have literally never had any motor issues with Link-Belt line and, when you do as many projects as we do, you need and appreciate that kind of reliability.” 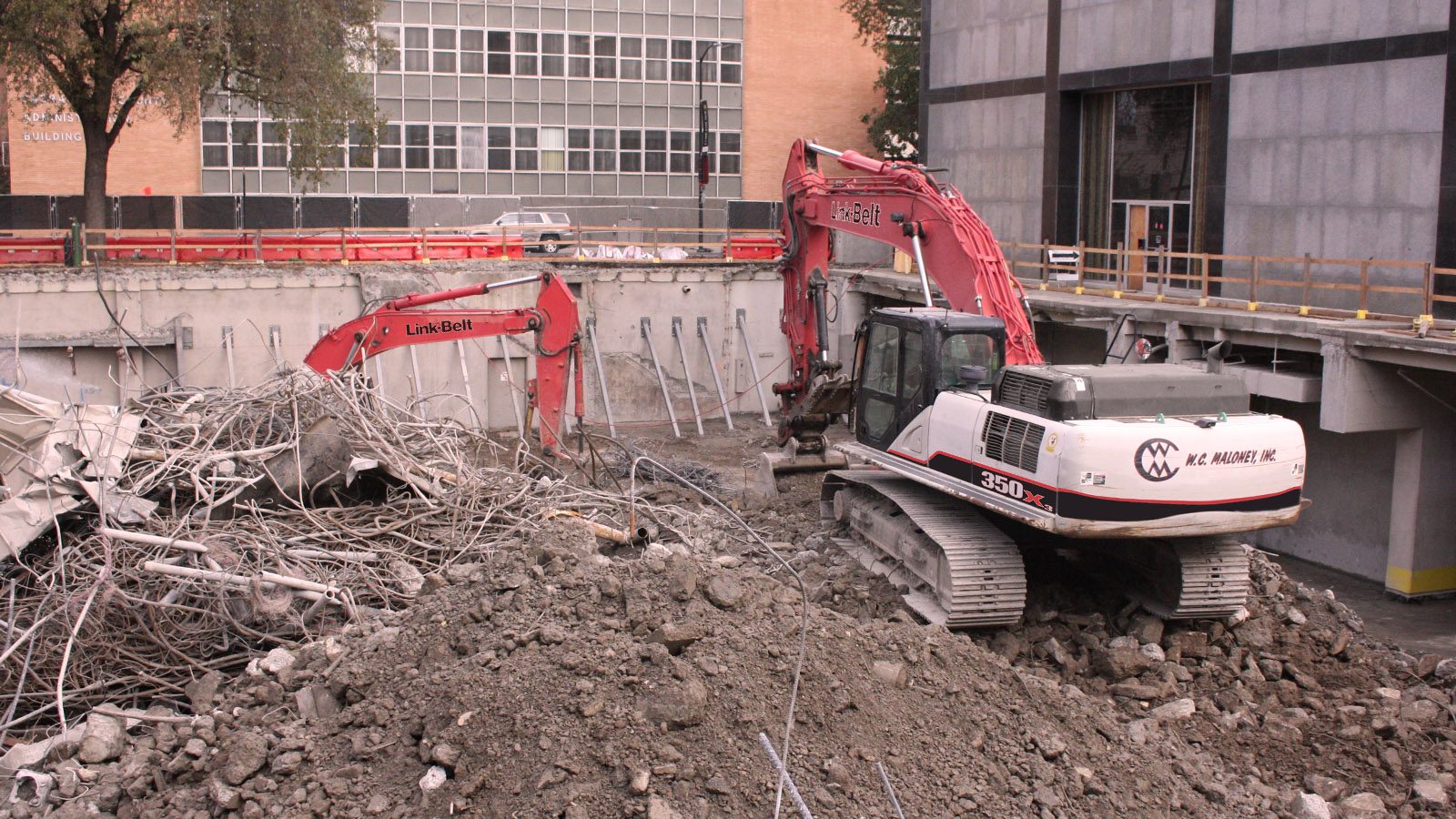 While the dealership that first contacted Maloney is no longer in business, its replacement, Bejac Corporation, has formed a friendly connection with WC Maloney since they began calling on them in 2008. Bejac has been there every step of the way as Maloney has grown, channeling that initial salesman’s message of support being key. For Curt Maloney, the equipment dealer’s role can’t be overstated.

“What makes Bejac so unique is that, because they cater to the demo industry, they are very much in tune with our needs,” he said. “They know these machines inside out, so when there is that rare issue that we can’t handle ourselves, they are right there — their support is second to none.”

Out With the Old

Earlier, Maloney’s downtown Sacramento demolition crew began preparing for the construction of a new eight-story Marriott hotel. According to Robert Kay, an estimator and one of the company’s project managers, a quartet of Link-Belt excavators were crucial in the transformation.

“This was a parking garage that had both street-grade parking as well as an additional level of parking underground,” he said. “We had to remove the top deck as well as part of the ramp leading to the lower level. The exterior perimeter walls were left intact, then shored up in preparation for new foundation piles to be driven, construction of the new foundation and installation of structural components for the hotel.”

Before removing the top deck, Maloney brought in a pair of Link-Belt 80 Spin Ace Midi Excavators equipped with hammers to perform slab removal in the structure’s lower level. The units, with a ground-to-top-of-cab height of less than 9′, were excellent for dealing with the restricted overhead clearance. A 350 X3 then did much of the hammering on the upper deck as well as the debris load out while working between column lines. To remove the concrete from the rebar, a Link-Belt 330 LX with a pulverizer attachment was used.

Nobody knows the advantages and disadvantages of a piece of equipment better than its operator. To that end, Cliff Harris, a thirteen-year Maloney veteran excavator operator, said he understands Maloney’s decision to go — and stay — red.

“I never used a Link-Belt machine until I started working here, but quickly found that I like them a lot,” he said. “They are powerful and very responsive which is key on jobs like this — and the fuel economy is the best I’ve ever seen. Every now and then Curt has to rent a machine and if Bejac doesn’t have a Link-Belt available, the difference between these excavators and the replacement unit becomes obvious. I can see why Curt likes these machines — when you find a good product you stick with it.”

The Sacramento demo project, which started in in November 2021 was completed in early January 2022 — a total of eight weeks.

“We are still doing a few small tasks at that site but are done for the most part,” said Kay. “As is usually the case for us, nothing was landfilled on this job. We recovered about 30 tons of structural steel and 800 yards of concrete, all of which is being taken to a recycler about a mile away. It’s been a great job and the machines have, once again, been key to the success of the project.”

Maloney currently operates with a staff of 50 people, all of whom Maloney is extremely proud, given challenges brought on by COVID. “I am very fortunate that we’ve been able to weather these times as well as we have,” he said. “I owe that all to the crews, the precautions we’ve had in place since the outset, the solid performance we get from our equipment and Bejac’s outstanding support. I couldn’t be more pleased.”