Having been in business for more than 30 years, Rick Engebretson thought he’d seen it all. However, a recent reality-check came in a high-profile project in San Diego’s harbor front district. There, his West-Tech Contracting team, wielding a small armada of Link-Belt excavators, faced challenges ranging from capping a sea wall tunnel to dealing with a forest of old timber shoring. At each stage, Engebretson reminded himself that they’d get the job done. Once complete, the site will be home to a state-of-the-art bio life sciences research center with a host of additional amenities, including retail and office space.

While the company self-performs a good deal of the work and at the harbor front site they are subcontracting to international giant, Turner Construction to create the San Diego Research and Development District (RaDD). Situated on more than eight acres and occupying six city blocks, the development represents the largest urban commercial waterfront site along California’s Pacific coast.

“We’ve been working here, in different capacities and phases, for about three years now,” said Engebretson, West-Tech’s owner and CEO. “When we first came on site in 2019, we were faced with a series of concrete cooling tunnels that ran below grade from North San Diego Bay to a decommissioned 1920s-era SDG&E power station. Before other work could start, these tunnels needed to be capped to avoid the worksite being flooded.”

To remove the tunnels and prevent flooding, West-Tech exposed both an outtake tunnel and a large, heavily reinforced, intake tunnel found several feet below MSL. Prior to removal, they constructed a temporary plug which needed the extensive use of divers entering the tunnels and aiding with structural reinforcement for the concrete structure being poured.

“With the temporary barrier in place and the water contained, we were able to use a number of large Link-Belt excavators — mostly 350X4s and 490X4s with breakers and drum cutters — to remove the tunnels and prepare for the permanent fix,” added Engebretson. “We’d done similar work in the past, but this was a one-off in terms of scope and challenge. Had it not gone as planned, we could have had the ocean pouring into the excavation. But our people, the divers, and the equipment all performed well.” 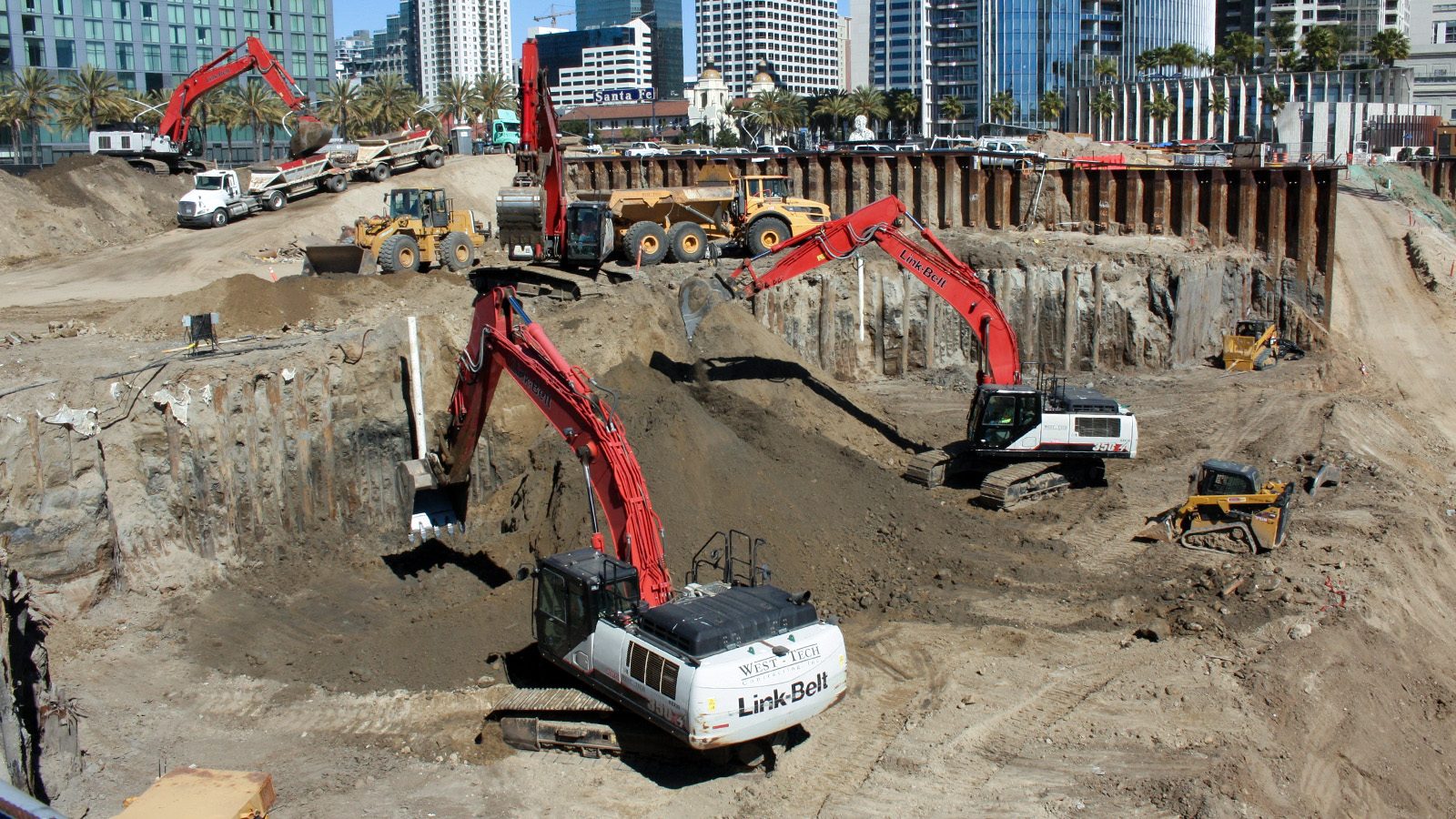 In keeping with the theme of “always expect the unexpected,” the company was confronted with a noteworthy challenge shortly after excavation began on a parking garage — one of five structures which will dot the site.

“Digging down, we encountered a massive number of wooden foundational piles that were driven back in 1939 to support the previous structure that was on site,” said Engebretson. “Each pile — and we’re dealing with about 5,500 of them — measures 55 feet long and, after being driven down, was covered with concrete to create a pile cap of sorts to serve as a foundational support. So, after we removed the caps, our job was to excavate down and remove the piles.”

Removing the piles has not been without challenge. Engebretson said they looked at different options for how to deal with the piles, one of which was to completely pull them out using a vibratory hammer. With removal being a long, tedious process, it was decided that leaving part of the pile in place would help ensure stability of the subsurface soil.

“If we totally removed them, the soil beneath it would be compromised, meaning we would have to grout it or stabilize it in some other manner,” he said. “So, we are leaving about 10 to 12 feet of the piles remaining in the ground and cutting them flush to the bottom of the excavation.”

The scope of West-Tech’s ongoing work at the RaDD site Includes earthwork and wet utilities. While that represents more than $10 million in work, it’s a mere fraction of the total $1.5 billion price tag for the project.

The timber pilings were unearthed in several stages: first, operators use Link-Belt 350X4s to expose the timbers, then a scarifier tooth clears the soil between each pile, further exposing them and making them ready for saw cutting.

“The operators make a first cut at about the 16-foot mark, allowing tiebacks to be placed into the sheet pile lining the site,” said Engebretson. “With the tiebacks in place, the remainder of the exposed section of the piles is cut and removed for shipment off site.”

It’s worth noting that, after removal, the timbers are not being landfilled or chipped but rather have a future as a repurposed product. “We have a contractor who is taking them, cleaning them up and fully intends to re-use them,” he said. “The timbers were very well preserved — they’ve essentially been underwater from when they were installed in 1939. He knows this material is too good not to save; we were happy to provide them.” 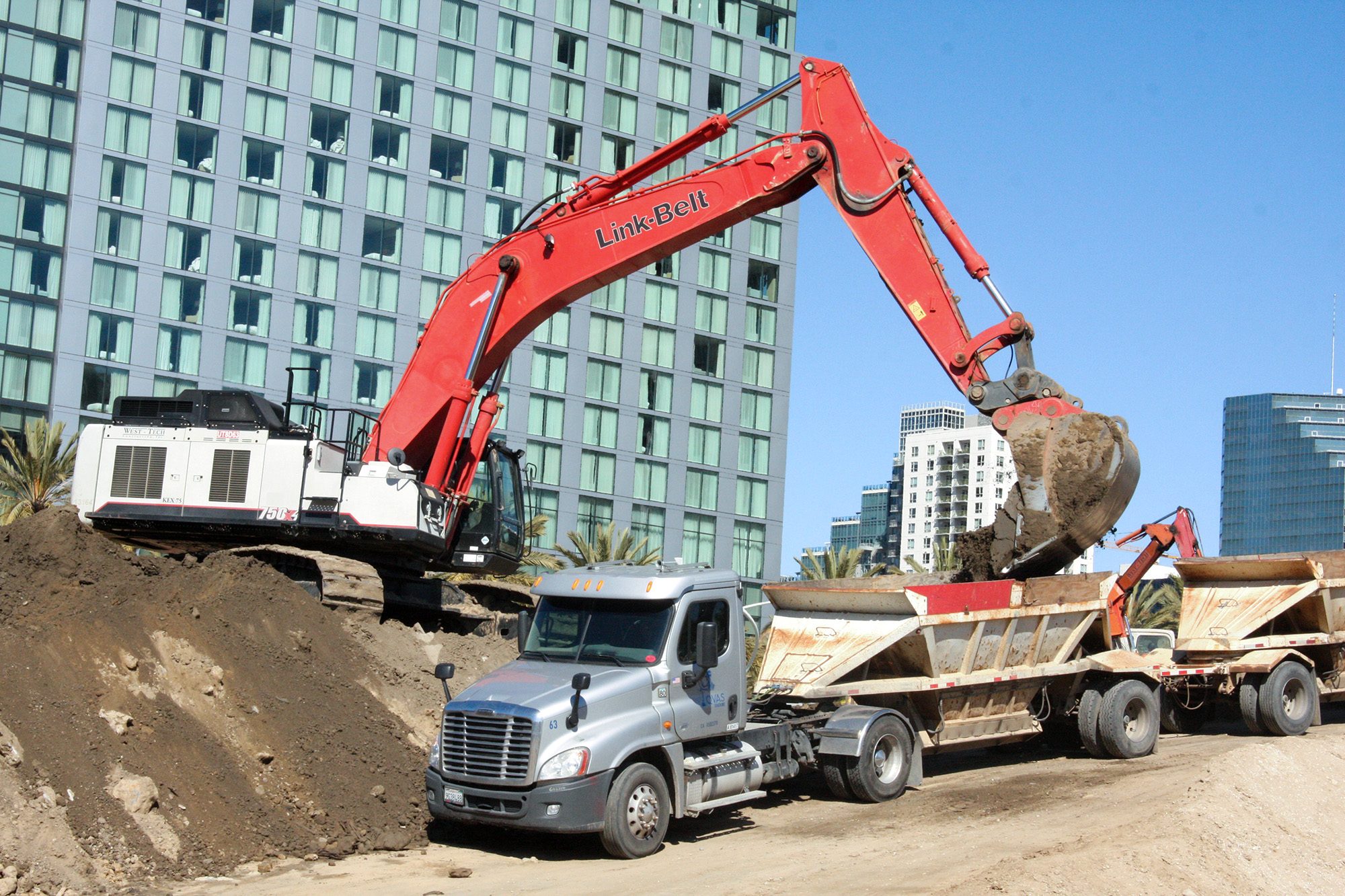 To meet the demands of the project, West-Tech has dedicated a full complement of seven Link-Belt machines to the RaDD job site. The excavators in use range in size from a 75 X3 Spin Ace that is proving invaluable for their limited access excavation needs, all the way up to a 750 X4, which is handling the soil loadout operation.

“We will be removing close to 100,000 yards of material — more than 7,000 truck loads — loading it out and taking it offsite,” said Engebretson. “We rely heavily on our excavators to ensure production levels remain high; we get that level of confidence with our Link-Belt units. But we are equally committed to the brand because of the support we get from Bejac Corporation, our Link-Belt dealer. Theirs is really a complimentary relationship: Bejac benefits from Link-Belt being such an outstanding machine while Link-Belt is helped because Bejac offers such great support. And we are the beneficiaries of both.”

Engebretson said he is grateful as well for the relationship they share with the team from Turner Construction. “Turner is an exceptional partner. Dealing with the challenges that we’ve encountered out here, we’ve been happy to have them in our corner.” 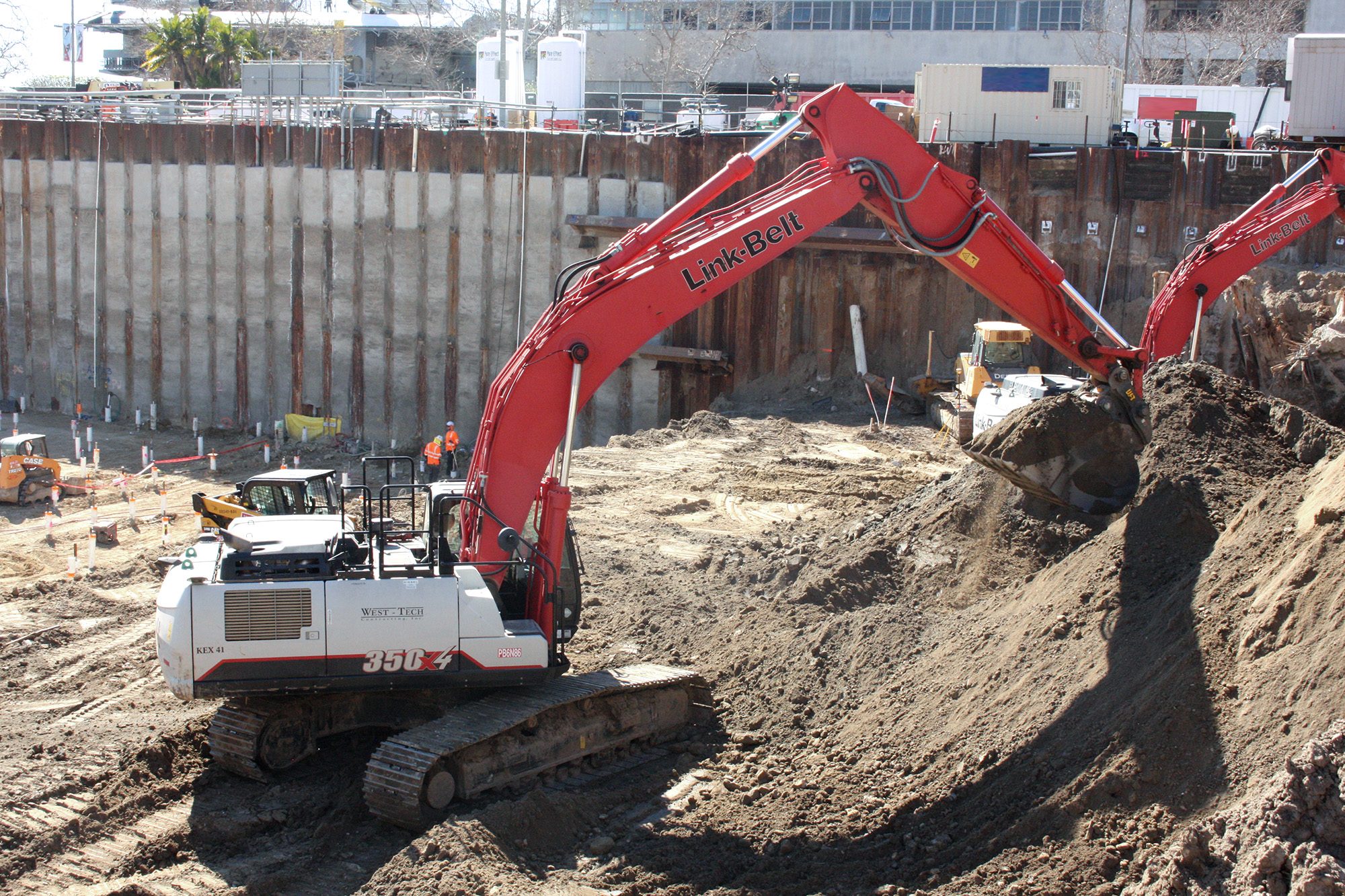 The support from Bejac to which Engebretson alludes has proven particularly helpful, given the lasting effects of the pandemic. While many contractors are suffering the effects of supply chain interruptions in terms of new purchases, West-Tech is, thankfully, fortunate.

“We operate a fleet of about 150 different types of machines, 35 of which are Link-Belt units, he said. “A while back, Bejac made us aware that there might be some challenges getting new product and to make certain that we were accurately forecasting our machine needs,” said Engebretson. “Based on their insight, we purchased a couple machines — a bit before we actually really needed them — in anticipation of what was coming. But, by doing so, we are not really feeling the effect of these issues right now, while others are, and we have Bejac to thank for that. Their support, the production we’ve gotten from our fleet and our outstanding crews have helped keep us on track out here.”

When complete, RaDD will provide 1.7 million sq ft. of laboratory, office and retail space, as well as three acres of green space in one of the most highly-visible areas of San Diego. It is expected to welcome occupants by 2023.